The Colonna family is an Italian noble family. It was powerful in medieval and Renaissance Rome, supplying one Pope and many other Church and political leaders. The family is notable for its bitter feud with the Orsini family over influence in Rome, until it was stopped by Papal Bull in 1511. In 1571, the heads of both families married nieces of Pope Sixtus V. Thereafter, historians recorded that "no peace had been concluded between the princes of Christendom, in which they had not been included by name".
The counts of Tusculum were the most powerful secular noblemen in Latium, near Rome, in the present-day Italy between the 10th and 12th centuries. Several popes and an antipope during the 11th century came from their ranks. They created and perfected the political formula of noble-papacy, wherein the Pope was arranged to be elected only from the ranks of the Roman nobles. Pornocracy, the period of influence by powerful female members of the family also influenced papal history.
According to tradition, the successors of the Tusculum counts were the Colonna family, founded by Peter (1099–1151), son of Gregory II and called Peter "de Columna" from his fief of Colonna, east of Rome: the Columna Castle, in Colonna, Alban Hills.
The celebrated poet Petrarch, was a great friend of the family, in particular of Giovanni Colonna and often lived in Rome as a guest of the family. He composed a number of sonnets for special occasions within the Colonna family, including "Colonna the Glorious, the great Latin name upon which all our hopes rest". In this period, the Colonna started claiming they were descendants of the Julio-Claudian dynasty.

Arms of the Colonna family 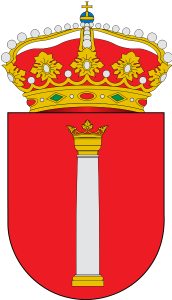 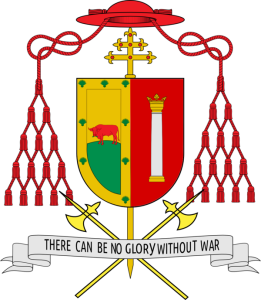 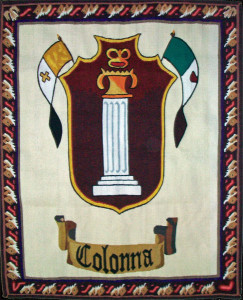 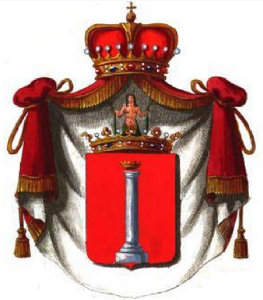 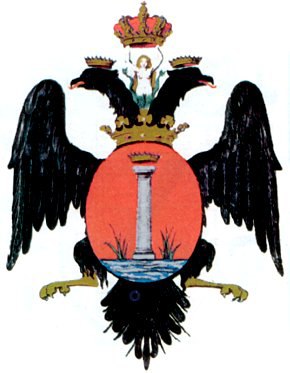 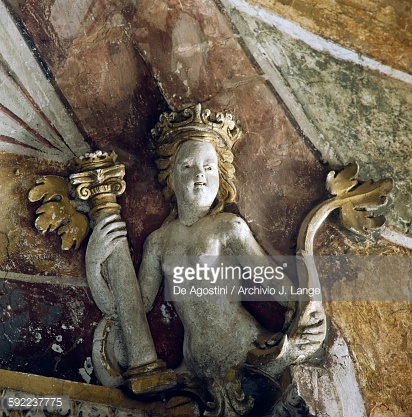 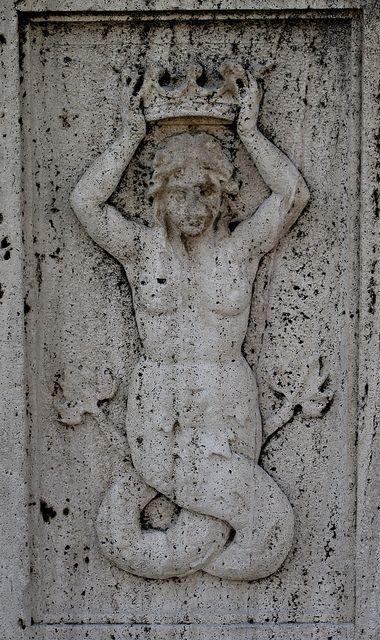 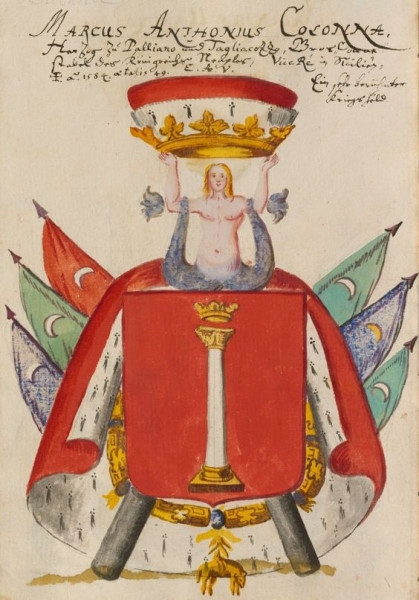 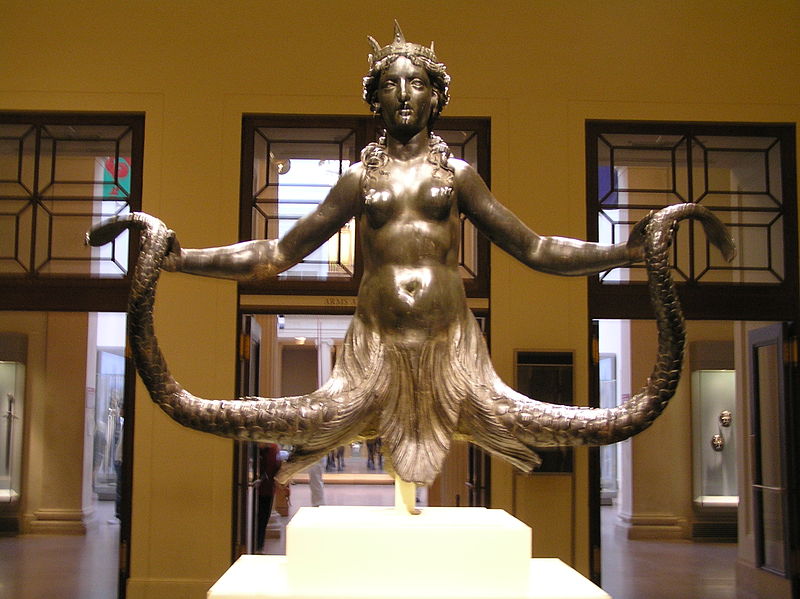 Statue of a mixoparthenos (two-tailed siren) from the New York Metropolitan museum. The museum placard reads "Siren, Bronze, Italian (Rome), ca. 1570-90. The siren, crowned and holding her two tails, was a heraldic device of the House of Colonna, a powerful Roman family. In all likelihood, this siren is the bronze named in a 1644 Barberini inventory, a Colonna princess having married into that family. It was no doubt intended for placement at a considerable height outdoors, where the extraordinary tumble of hair would have been seen to full advantage. 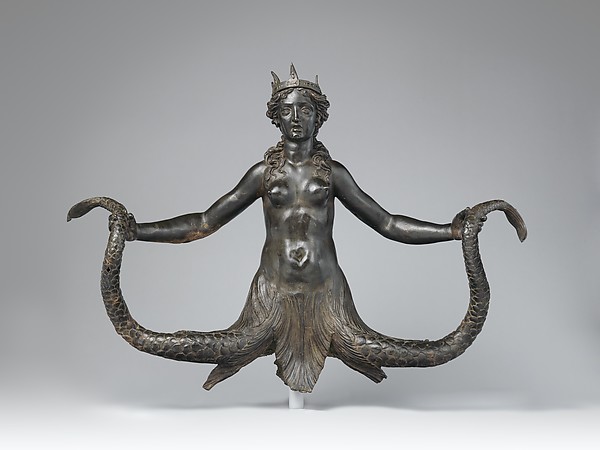 Direct and dramatic, this bronze half-length statue represents a nude woman, aquatic from the waist down, who holds a scaly tail in each hand. Her long hair trails behind her to a set of fish gills that fan out from all sides of her body. She wears a pointed crown, which is clearly a later addition, though her roughened pate and open cranium indicate the presence of a previous crown. She would have been placed high so that the viewer could not see the top of her head. There is no physical evidence that this bronze was part of a fountain; rather, it appears to be an emblematic decoration.
The statue reflects traditional types of mermaid figures and in particular the mythic Greek sirens. The sculptured figure of a woman holding her own fish tails can be found on Romanesque capitals, and in the sixteenth century the image became a decorative motif for tapestries and small bronze candelabra. The crown, however, indicates that this statue is a specific dynastic symbol. A great Roman family, the Colonna —  and especially the princely Paliano branch —  ​adopted this image as an emblem. As such, it appeared on their tombs in Rome, at San Giovanni in Laterano, and in the town of Paliano, as well as on furniture and in ceiling decorations. A volume of personal and family devices (imprese) collected by Paolo Giovio illustrates and describes the emblem of Stefano Colonna and quotes his motto, "Contemnit tuta procellas" (She defies the tempests). 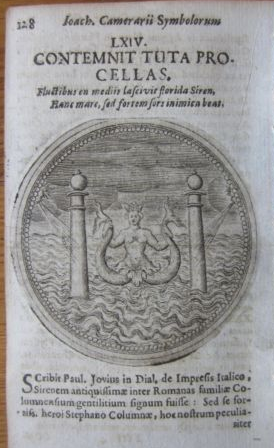 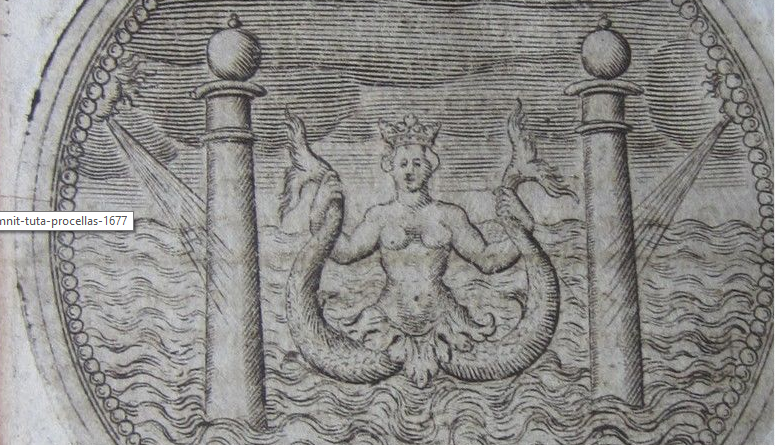 The most illustrious member of the family, Marcantonio Colonna (1535 – 1584), was celebrated for defeating the Turks at the battle of Lepanto in 1571. A siren appears on his armor in a painting and tops two rostral columns on a stone relief memorializing the victory at Lepanto. It would be particularly appropriate if, as in the stone memorial, the bronze Siren had originally been displayed on top of a column, since a cylindrical shaft was also a family emblem (colonna is Italian for column). Her gills would have spread down around it. The brusque chasing of her hair and some other features would be explained if the figure was meant to be seen from a distance — for example, from a perch atop a column.
A 1644 inventory mentions "a siren of bronze, with a crown on her head" standing in a small room in the Palazzo Barberini apartments of Cardinal Antonio Barberini. Antonio’s brother Taddeo was the husband of Princess Anna Colonna, and until recently it seemed to be a foregone conclusion that Antonio had received the Siren from Taddeo. Archival research, however, has turned up an inventory of April 1627 that documents the sculpture as in the palace of the recently deceased Cardinal Francesco Maria del Monte on the via di Ripetta. Peter Bell has pointed out that it could have been purchased by Antonio Barberini directly from Del Monte’s heirs. Thus, there is no proof that the Siren was owned by the Colonnas. Nonetheless its iconography points to them as the family most likely to have commissioned the Museum’s imposing and doubtless expensive bronze; moreover, it is not out of line to guess that it was one of many works created to celebrate the great victory of Marcantonio Colonna in 1571 and that it remained among the family’s possessions for some time.
It is difficult to attribute the Siren directly to any artist, but its style is close to Roman bronze work of the period 1570 – 90. Museum curator Olga Raggio noted that Taddeo Landini’s bronze youths of 1581 – 84 on the Fontana delle Tartarughe in Rome, for example, have similar rhythmical poses and wet-looking, tousled hair. Another comparison, one that James Draper has informally proposed, is with the bronze lions supporting the Vatican obelisk that Lodovico del Duca cast in 1586, after models by Prospero Antichi and Francesco da Pietrasanta (Saint Peter’s Square, Rome). The vigorous modeling of the lions’ manes was meant to be seen from afar, as was the Siren’s hair, and the statues have similar iconic roles as bronze decorations. Like the Vatican lions, the Siren was likely a collaboration between sculptor and bronze founder, who created a brilliant —  essentially Roman —  emblem.
[Ian Wardropper. European Sculpture, 1400–1900, In the Metropolitan Museum of Art. New York, 2011, no. 28, pp. 90–92.]
http://www.metmuseum.org/collection/the-collection-online/search/210103
Tags: (с)офиология, ecclesia catholica, gaya scienza, imagines, personalia, turris, Италия, Море
Subscribe
Comments for this post were disabled by the author